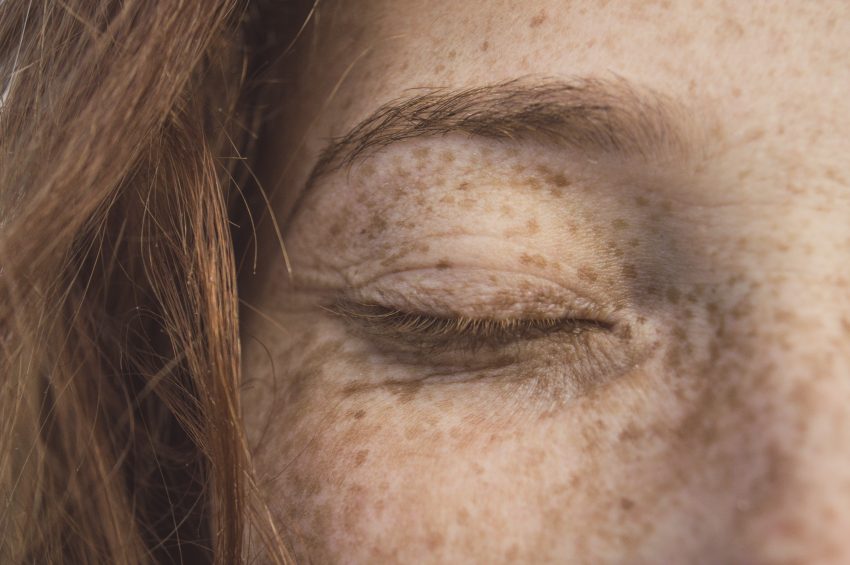 Freckles are small brown spots that appear on skin recently exposed to the sun. In the same way that skin can tan or burn in the sun, skin can also develop freckles. They are harmless, painless and come in all different shapes, sizes and shades. To put it simply, freckles are caused by melanin, which is the same product that is responsible for the colour of your hair and your skin tone. When light skin is stimulated by ultraviolet radiation – which comes from the sun – freckles can appear. They are completely harmless and are simply more pigmented patches of skin, which are shown by the darker spots.

The Two Different Types of Freckles

Many people make the mistake of assuming that all freckles are the same, but there are actually two different types. Ephelides and solar lentigines are two types of freckles that look similar in appearance; they are both flat, darker spots on the skin. However, there are some key differences between them.

When most people think of freckles, it’s ephelides that they are thinking about. These begin to appear from around two to three years of age and usually appear after you have been out in the sun. They are generally around one to two millimetres in diameter, though some can be bigger and then crop up sporadically on various areas of the body. Ephelides are most commonly found on your arms, chest, face and neck. They may fade during the winter, and they tend to become less noticeable as you age, and some might even disappear altogether. Ephelides can be red, light brown or dark brown. These freckles are genetic, but solar lentigines are not.

You might have heard dark patches on the skin referred to as sun spots or liver spots, and these are solar lentigines. They are found in areas that experience sun exposure, such as your back, face, arms, hands, shins, chest and face. These tend to appear as you age, and they are most common in people aged 50 plus, whereas ephelides begin showing up at a much younger age. Solar lentigines can range from light yellow to dark brown in colour, and they have defined borders. They are similar to ephelides in that they appear when the skin has been in direct contact with sunlight, though ageing is a key factor in the appearance of solar lentigines. Where ephelides often fade during the winter months and disappear as you get older, solar lentigines do not fade or disappear.

There is a strong link between freckles and one of the primary genes responsible for determining your skin colour and hair colour. The gene known as MC1R controls how much melanin you produce, both the eumelanin and pheomelanin type of melanin. Depending on how active or inactive your MC1R gene is – something that links back to your parents and their MC1R gene – you will produce more or less of the pheomelanin melanin. A lot of pheomelanin causes light hair, light skin and a higher chance of having freckles. Therefore, freckles are undoubtedly genetic. If your parents have freckles, you are more likely to have freckles yourself.

Can I Get Rid of Freckles?

There is no need to treat or get rid of freckles, as they are harmless and pose no risk to you or your skin. In fact, a lot of people like the way freckles look. As you age, you might find some freckles fade or disappear entirely, whilst others remain visible for many years. However, if you don’t like the look of your freckles, there are ways to fade and remove them.

Chemicals are often used to remove freckles, specifically AHA (alpha hydroxy acid) and TCA (trichloroacetic acid), and chemical peels are effective. Retinol applied as a topical cream and cryotherapy are also used as freckle removal treatments. One of the most popular ways to remove freckles is laser treatment, which works by resurfacing the skin and encouraging new cells to grow. This is the preferred treatment route for a lot of people, as freckles can be successfully removed within one or two sessions, and there are no significant side effects. The best treatment for you will depend on a number of factors.

Are Freckles Different to Moles?

People mistake moles for freckles, even though they are different. Though freckles form when the skin is exposed to sunlight, and the skin darkens, moles form when a group of cells bind together. They are usually round, slightly raised – though some are flat – and brown in colour. However, moles can also be black, red, pink, colourless, and the same colour as your skin.

Moles can be found anywhere on the body, and they are not reserved only for areas that are visible in the sun. You can even find moles on your scalp, feet, underarms and under your nails. Most people have one or two moles, though many individuals have a lot more. They are most commonly found on those with lighter skin, in the same way that freckles are, and they also start to appear from a young age. Like freckles, moles do not need treating, but they can be removed for aesthetic purposes.

Though many people like their freckles, there is no shame in wanting them to be removed. If you don’t like the way they look and you want to get rid of freckles, you can have them professionally removed via laser treatment. To find out more about removing freckles using laser treatment, speak to a specialist.